When I came to Sicily years ago, I had no idea that the problem of stray animals was so big there. Many people still see animals as dirty and annoying, and they don’t seem to care much about the suffering of stray animals. As a tourist you might easily get over that, but over time I found it more and more difficult to close my eyes to it. I wanted to rescue all those poor strays, but of course that was impossible. And besides, how would I do that? Anyway, I didn’t have to worry about that for long, because the strays presented themselves on my doorstep, as it were.

It started 15 years ago with a sick kitten that my husband and I found on the street without its mother. The vet couldn’t do anything to help it and the animal died in my arms. I’d had the kitten with me for just 24 hours, but I was devastated. Fortunately, many rescues followed that were more successful, and many of them ended in an adoption in the Netherlands. From ‘ordinary’ red foundling to half-blind calico cat, from dumped sheepdog to three-legged kitten, and from abandoned elderly cat to toothless tomcat, I took all kinds with me on a plane to the Netherlands. The counter is now at 15 cats and 2 dogs! 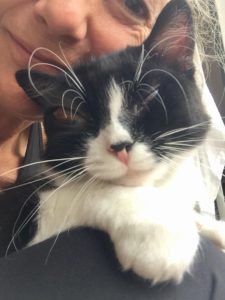 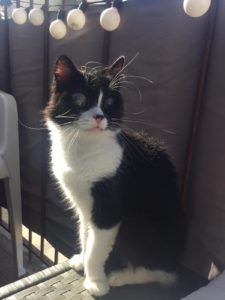 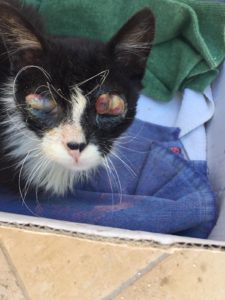 One of the latest rescues was Marie’s. This crumpled black and white cat had been walking around our neighborhood for days. Her fur looked awful and her eyes seemed to be glued shut. After several attempts, I managed to catch her and take her to the vet. He found she had scabies. I didn’t know back then that you can actually easily identify scabies by an unsightly scaly and wrinkly skin, usually around the head, neck and ears. This is accompanied by terrible itching, and scratching causes nasty wounds and scabs. A lot of stray animals suffer from scabies, which makes their already difficult life even harder. In many cases, however, scabies can be treated very easily with, for example, a pipette of Stronghold. This is an anti-flea, anti-worm and anti-parasitic agent.
Since I learned it helps against scabies, I have stocked up some Stronghold to be able to help strays get rid of that terrible itch.

Unfortunately for Marie, her eyes were badly infected by the scabies. After we managed to open them with eye cream, they swelled up enormously in the following weeks. That looked awful, but it was part of the healing process. We persisted and kept on smearing for weeks, even though for a long time it seemed that Marie had given up life. She didn’t want to drink or eat, and she peed in her own bed.

“That makes sense,” the vet said, “she’s depressed because she can’t see anything”.
But giving up was not an option, and Marie progressed slowly, she started to purr, and transformed into a healthy, sweet and beautiful lady with super long whiskers. And she does need them, because as a result of that nasty scabies she has become completely blind. Fortunately she can live with it, but she is insecure and depends very much on me.

In the end I didn’t succeed in having Marie adopted, I guess many people would consider her disability too big of an obstacle.
I’m actually glad because I don’t ever want to loose this little stray!