Unfortunately, many animals are often victims of traffic, neglect, poaching or other forms of animal suffering. On the other hand, there are people who are committed to help these animals. With a fixed monthly contribution we help them structurally with the relief and recovery of animals such as our dog Bob, cat Elvis, orphaned elephant Sirimon, 4 baby rhinos and gorilla infant Bisoke. By taking care for animals, a lot is involved: the costs of daily food, medication, accommodation and / or protection can increase enormously. That is why we are happy to help shelters, sanctuaries and caretakers by virtually adopting these animals.

If you also want to help, please donate! 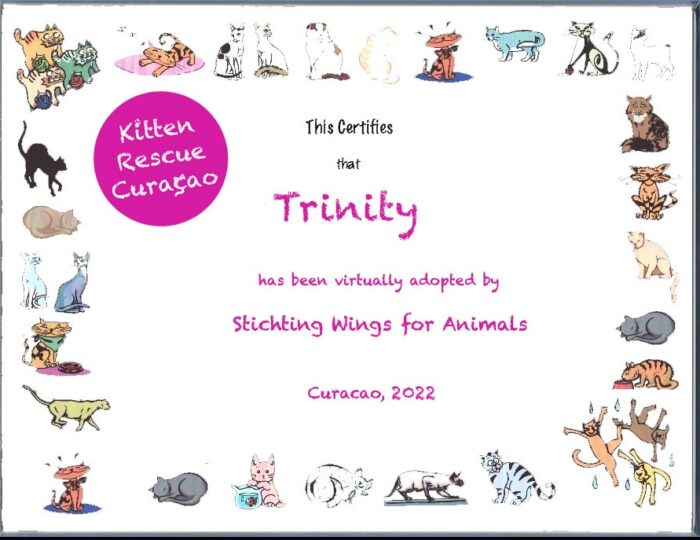 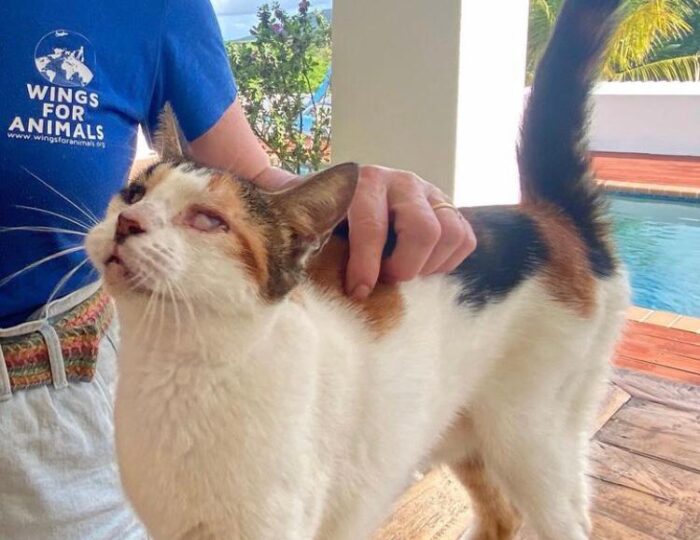 Trinity was found in a garden in 2017, together with her brother Neo. They were  about 6 weeks old then and very sick. Both had serious eye infections in both eyes. The eyes were completely caked with pus. After a long process with a lot of eye ointment, it turned out that their eyes would never fully recover. This makes Trinity almost blind. She probably still sees shadows. She lives with Kitten Rescue in a safe environment where she knows her way around. She is fine there. Trinity is a sweet cat who likes to be with the people she knows, but she also regularly goes outside for a walk through the garden.

We have adopted Trinity remotely so she can be happy at Kitten Rescue Curacao. 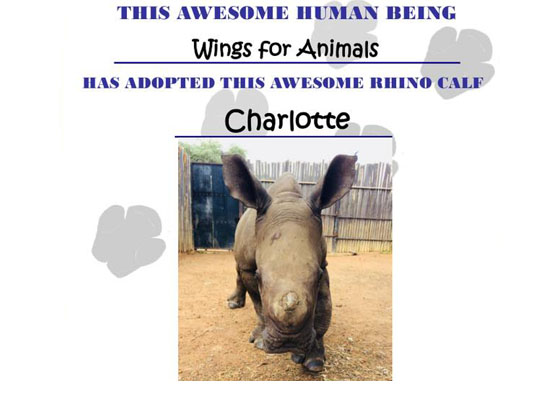 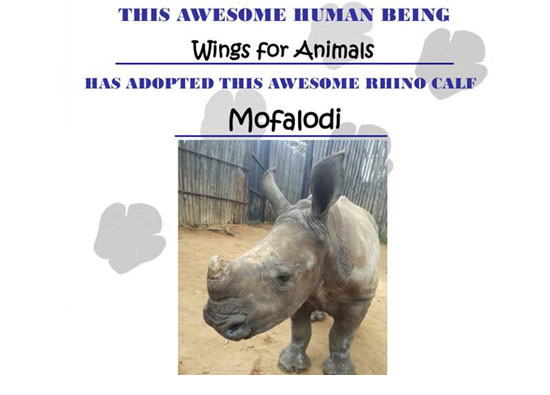 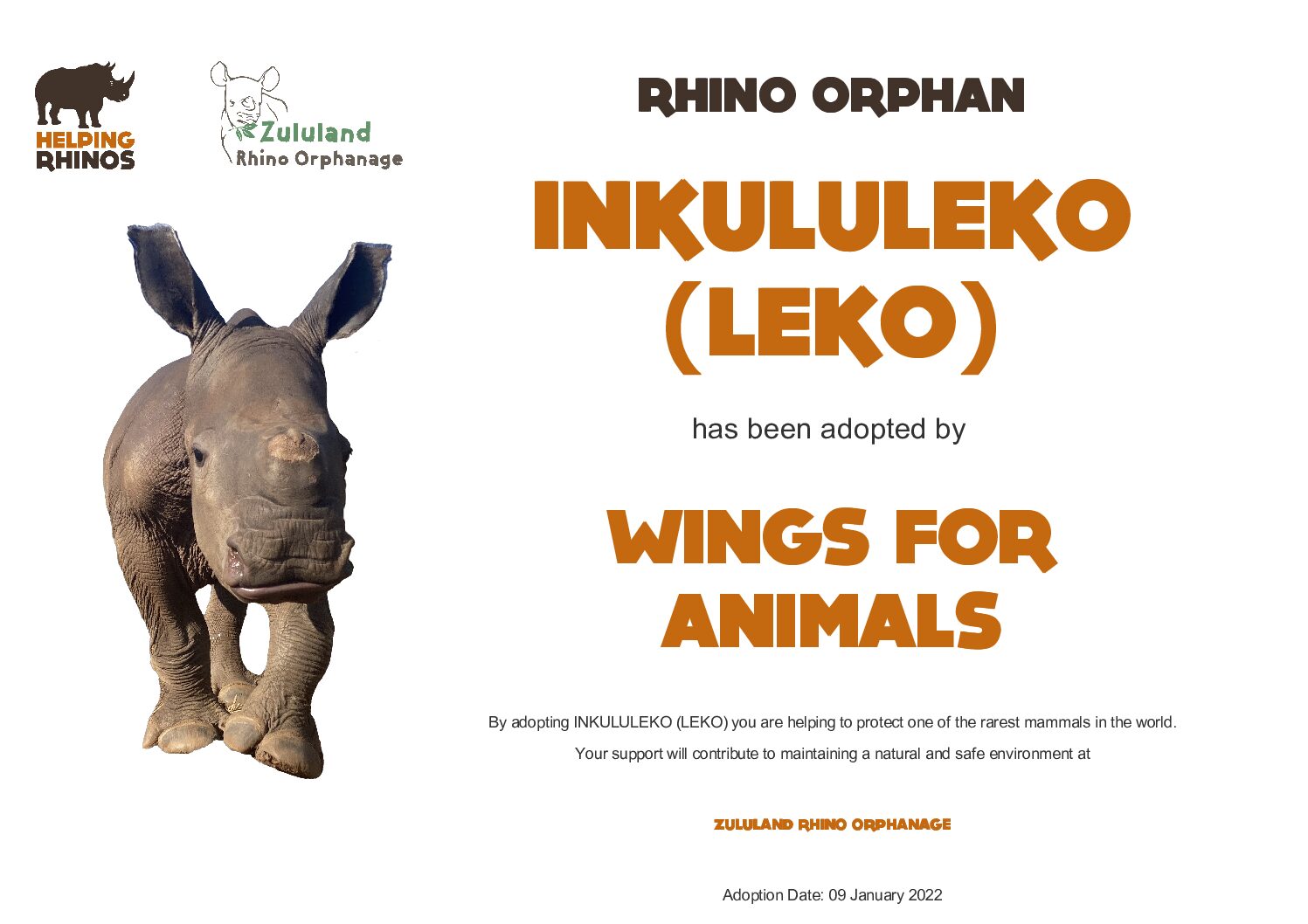 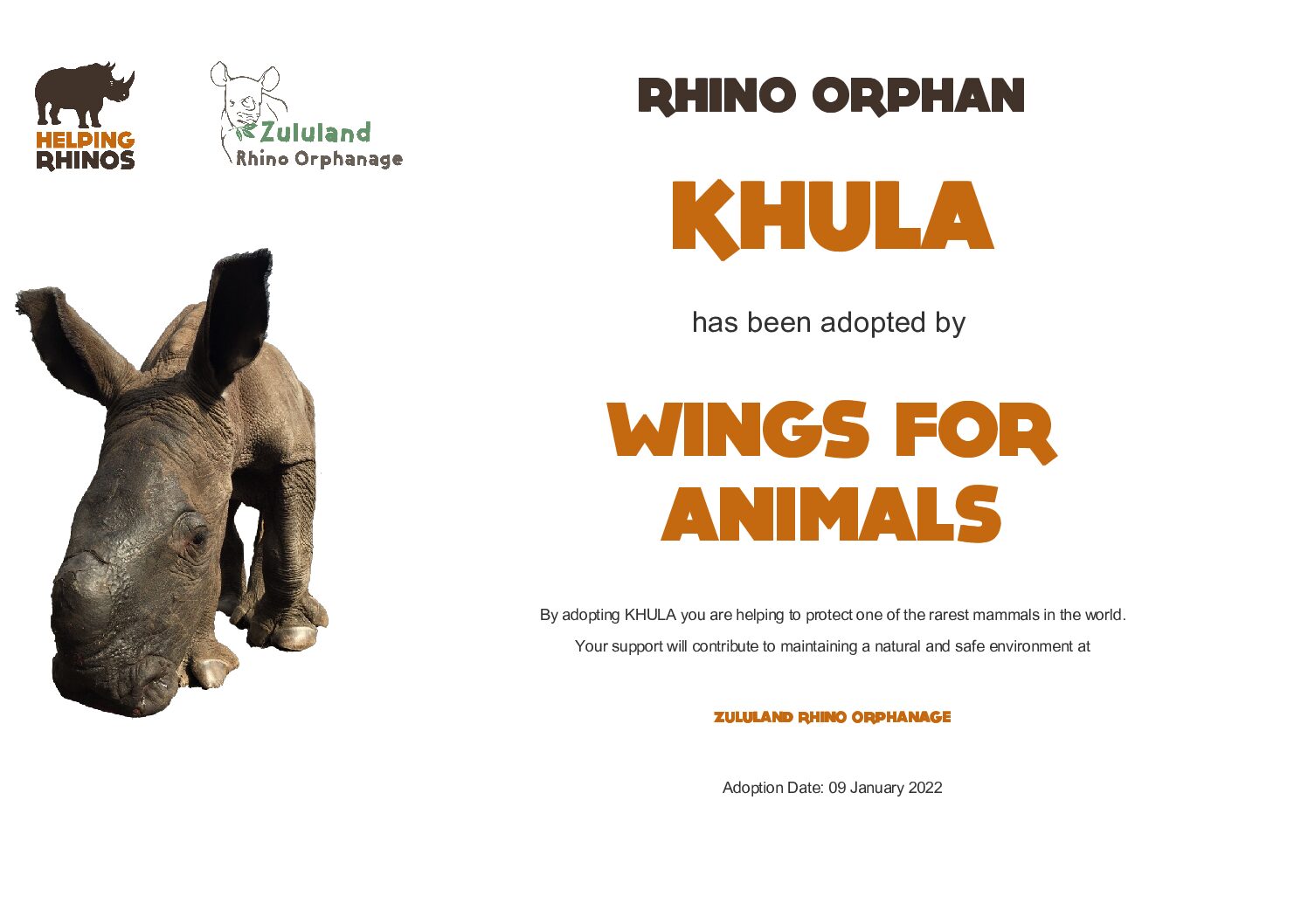 Lottie, Moldafi, Khula and Ntoto: 4 orphan rhinos that Wings for Animals has recently adopted for Helping Rhinos and The Rhino Orphanage, both in South Africa.

Because of this adoption it is possible that the orphans get milk to grow and to support them to go back to their original habitat eventually.

More information about the baby rhino’s and adoption:

We thank both shelters for their enormous effort to protect the rhinoceros that is threatened with extinction, to care for the orphan rhinos and give them a second chance. 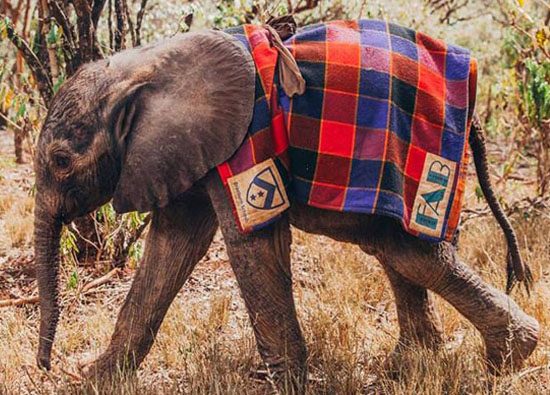 Wings for Animals has been in close contact with The David Sheldrick Wildlife Trust since our origin. We have been bringing pantyhoses from colleagues for a long time; with these tights the caretakers of the shelter tie the blankets around the tummies of the elephants.

They need the blankets to protect them selves from sun and cold, unfortunately they do not have a mother anymore. Since rope does rub on their bellies and tights do not, this is a nice and cheap solution!

When we delivered the tights personally, we met a lot of the rescued orphaned elephants, as we did Sirimon. Like last year, we also virtually adopt ‘our boy’ this year and continue to follow him closely.

The rescue of Sirimon can be seen on this video. 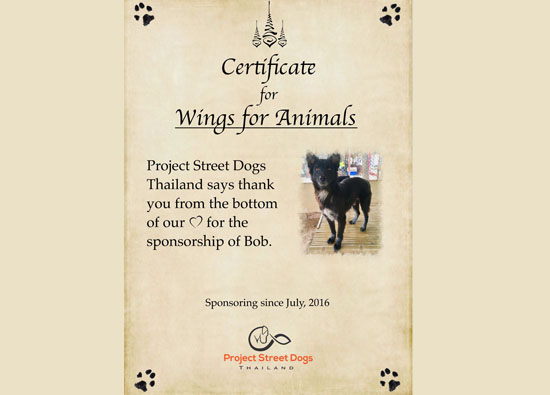 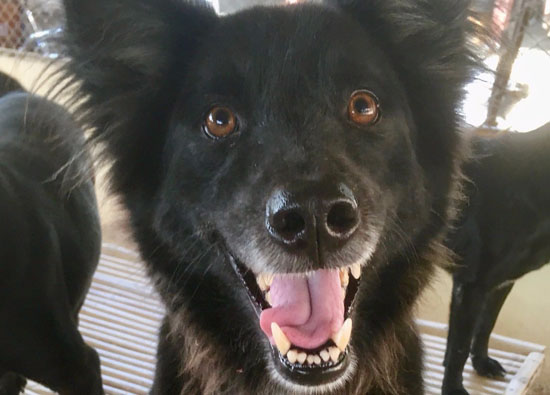 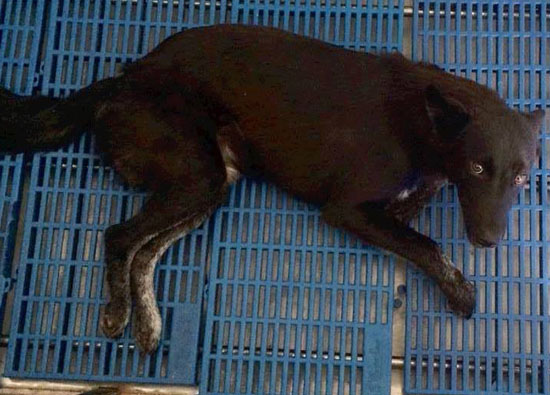 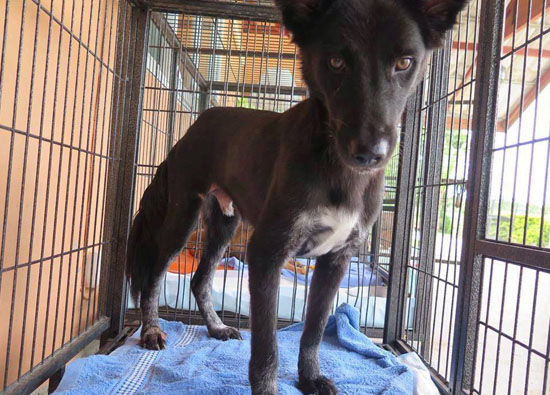 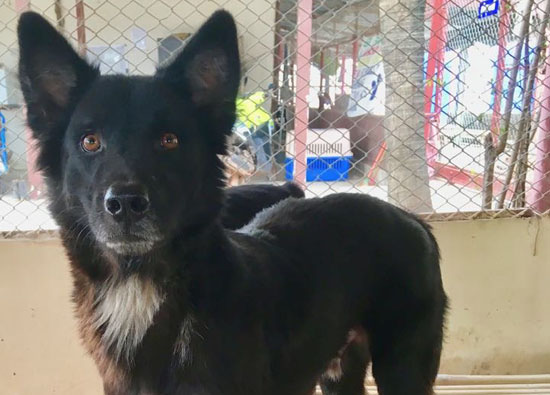 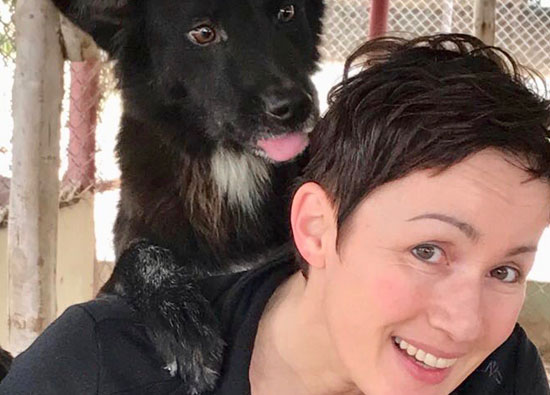 In the summer of 2015, Bob was the victim of a collision, including Asia, another street dog in Hua Min, Thailand. Fortunately Bob and Asia were found by volunteers from Project Streetdogs Thailand.

With many KLM colleagues we raised money to allow both dogs to be operated. Bob and Asia became friends and after their recovery together they moved to the north of Thailand, to the Saved Souls Foundation. A beautiful organization where the dogs are well cared for, with a large and safe area where the dogs can play. Bob and Asia can be a dogs again, despite their handicap!

Thanks to the collection campaign for Bob and Asia, we, as colleagues, had a lot of contact with each other. We wanted to mean more for the animals in need and in November 2015 we founded the Wings for Animals Foundation. Asia has been adopted in the meantime, so it makes sense that Bob becomes “our” dog! Hereby the pictures before, during and after his operation. The last photo was recently taken, you can see he is so happy! He is a brave fellow who constantly looks after his friend Asia!

Thank you for adopting Bisoke! Here at the Fossey Fund, we are inspired daily by the generosity and support of friends like you.  Your symbolic adoption will ensure that the Fossey Fund is able to continue its work protecting gorillas and the forests they call home. This holistic conservation work ensures that gorillas will be a part of our world for generations to come.

We are inspired, daily, by the graceful, peaceful, and caring nature of these beautiful animals. The proceeds from your adoption will directly support wild gorilla protection in Rwanda and the Democratic Republic of Congo. The Fossey Fund is the only organization with boots on the ground 7 days a week, 365 days a year – we never leave the forest.

Every gift saves a gorilla and changes a life. 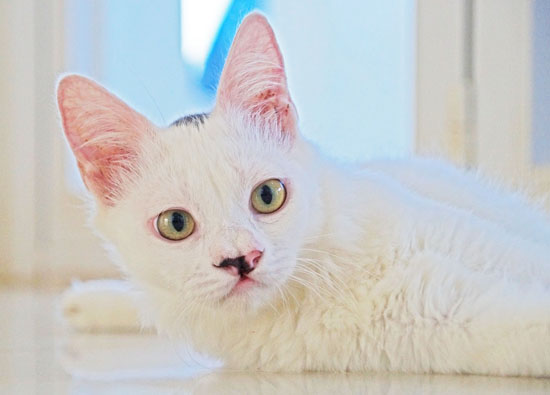 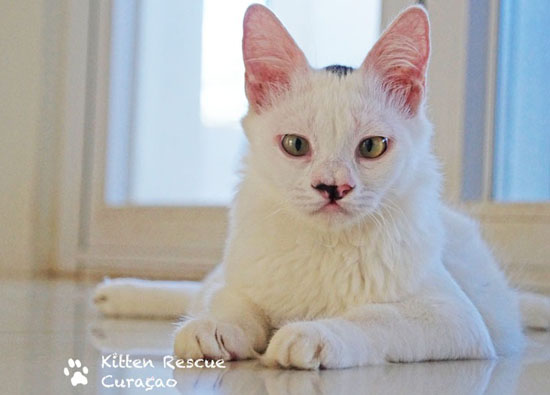 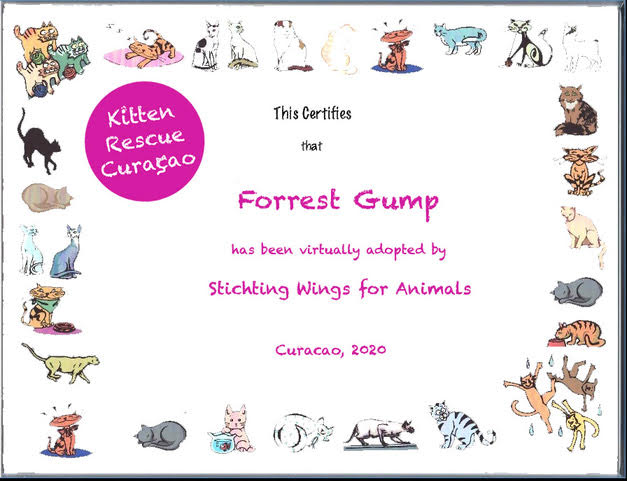 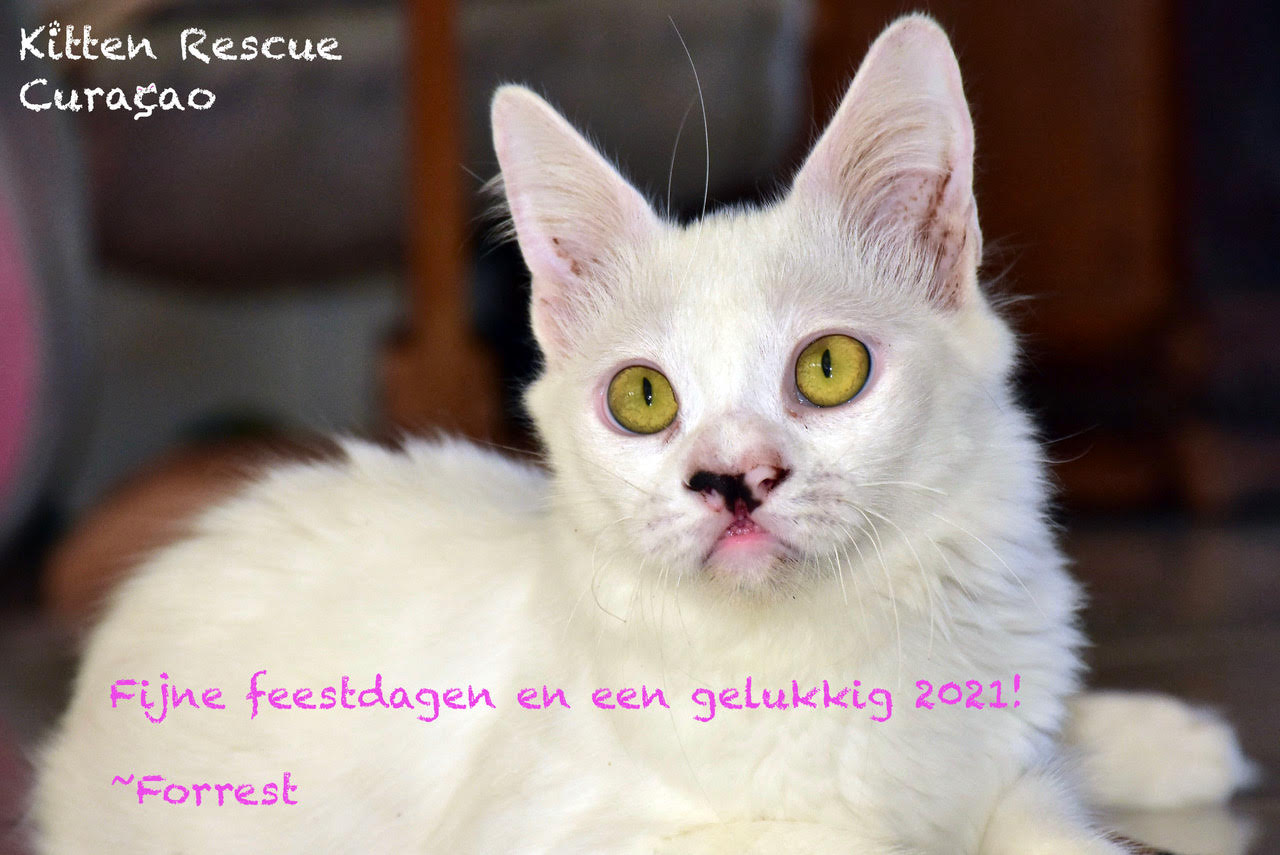 Forrest was found on the street when he was about 2 weeks old, along with his sisters. It was very clear that there was something wrong with Forrest. He has a cleft lip and he couldn’t stay upright. He appears to have a brain disorder called Cerebellar Hypoplasia. This means that the part of the brain that coordinates has not been developed. Now that he is older, his brain has compensated for some of this loss, but he is still unstable and could fall over. Forrest is a sweet kid, with his adorable head; he is doing just fine and he is very friendly with the other cats. 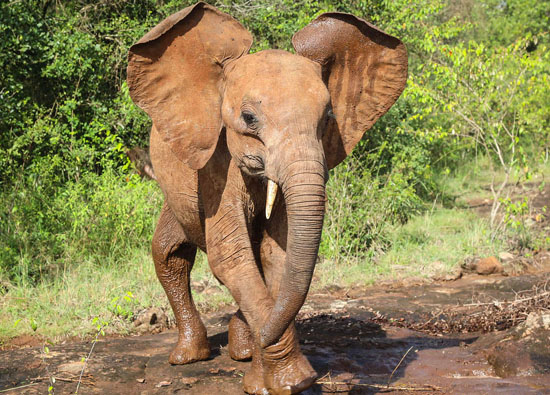 Rama was found as a lonely calf without a herd. Examination showed that his hind legs were slightly bent and that he had poor vision. Rama can now move reasonably well now that his strength returns and his curved legs give him a unique appearance and gait! A specialist was called in who concluded that his poor vision is due to neurological factors. However, things are getting better and although he does not yet have full eyesight, people remain hopeful that his vision will be completely back! 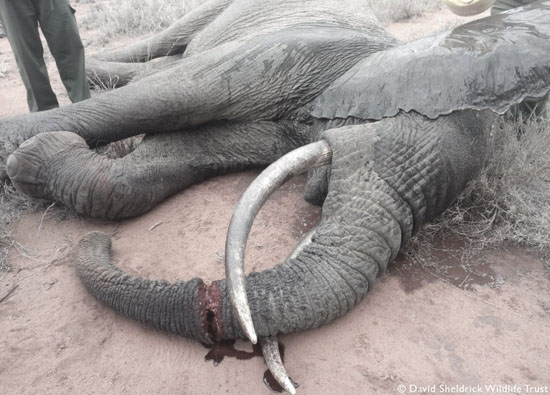 Baby elephant Enkesha was spotted in a herd with a bow tightly wrapped around her trunk. An investigation determined that the bow had almost completely cut away the trunk … It was decided to remove Enkesha from the herd and transport it to the sanctuary for a surgical procedure surgery and medical care. The wound on her trunk heals slowly, but heals well! She will never be able to use her trunk completely again, but she can manage just fine! 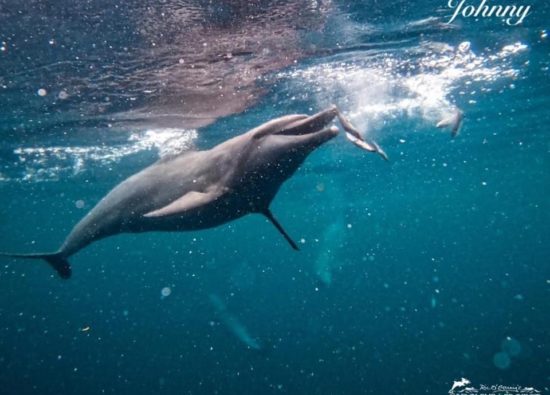 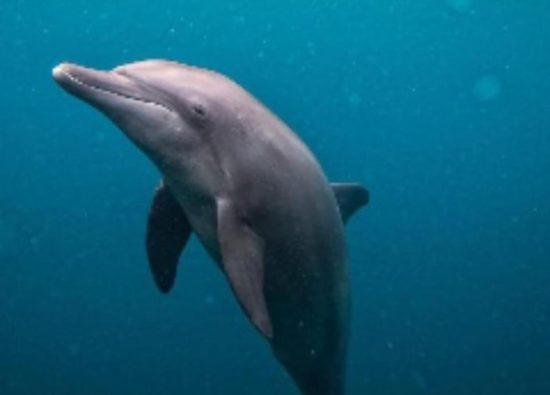 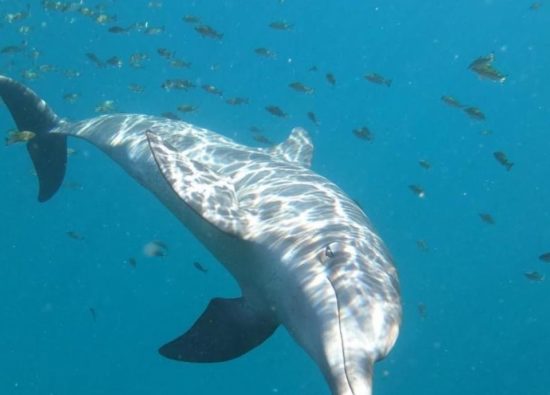 Adoption of Rocky, Rambo and Johnny!

In collaboration with local partners JAAN Foundation and Dolphin Project, the Umah Lumba Rehabilitation, Release and Retirement Center in Bali (“Umah Lumba” means “dolphins” in Balinese) was built!
The Umah Lumba Center is a purpose-built facility for captive dolphins. The facility is designed to stabilize the mammals, check their health and look at their eligibility for release.
Rocky, Rambo and Johnny were trapped for several years in a shallow, heavily chlorinated pool at a hotel in North Bali.
After confiscation, they were taken care of at the Umah Lumba Center and enjoy natural seawater and the ability to dive and swim!!  They are cared for 24 hours a day, 7 days a week by the team who are committed to making the life of the dolphins as natural and independent as possible.
Virtual adoption of these dolphins will allow Johnny, Rocky and Rambo to continue to receive the best possible care.
More information: https://www.dolphinproject.com/donate/bali-dolphin-sanctuary/